Mirrors to the Soul: Self-Face Representation and Social Mirroring

Dr Harry Farmer is currently a Research Associate in Virtual Reality in the CREATE lab at the University of Bath’s Department of Psychology. He completed his PhD in Psychology at Royal Holloway, University of London in 2014 and worked as a Research Associate in Social Neuroscience at UCL’s Institute of Cognitive Neuroscience between 2014 and 2018. His research focus is the relationship between the self and social cognition and encompass a wide range of methodological techniques including conceptual analysis, psychophysics, physiological recording, neuroimaging and virtual reality. He has authored 13 articles in peer reviewed journals including Psychological Science and Neuropsychologia. His past work has explored how the plasticity of self-representation at both the bodily and conceptual level can be used to modulate social attitudes including prejudice. He has also carried out work in the computational modelling of learning about similarity between self and other and is currently Empirical Lead on the Estranged From the Self, Estranged from the Other’s project which explores the relationship between abnormal experiences of the self in Depersonalisation and social interaction in clinical and non-clinical populations. He is a member of the Experimental Psychology Society and the Institute of Electrical and Electronics Engineers

Mirrors to the Soul: Self-Face Representation and Social Mirroring

The ability to accurately recognise one’s own face has long been held to be one of the key markers of higher level consciousness. Recent research has given us an increased understanding of the contribution that the integration of information from several different sensory channels including vision, touch and our internal senses of proprioception and interoception make to the representation of self face. In addition work in social neuroscience has shown the important role that the mapping of other people’s actions, facial expressions and touch and pain experiences onto one’s own sensory systems (mirroring) plays in the development of empathic responses, perspective taking and the . In this talk I will draw on research from the cognitive neurosciences to illustrate how self-face perception both influences and is influenced by social interactions with others. First, I present evidence that tactile and motor mirroring of others can lead to increased perceived facial similarity and with it an increased sense of affiliation and trust. I will then outline research demonstrating that this relationship also works in reverse with trustworthy behaviour and increased social affiliation modulating the response of both the tactile and motor mirror systems. Finally I will present recent work examining how disruptions to the sense of self see in the condition of depersonalisation lead to disrupted mirroring in both the tactile and motor domains. 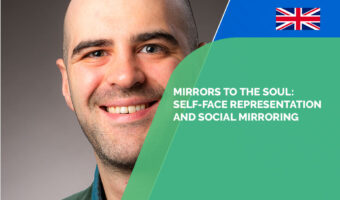